Recently, I took a trip with my mom to England to take a look at a few graduate schools. One of the hardest things about traveling as a gluten intolerant or celiac person is knowing what you can or can’t eat, and there’s nothing more likely to put a damper on your trip than getting sick from something you ate. That said, researching what you can and cannot eat across international borders can be not only challenging, but almost impossible — especially if you’re going somewhere where your native language isn’t the one commonly spoken.

Thankfully, that wasn’t a concern I had on this trip. I’ve been to England a number of times before, and spent a year living there (pre-discovery of my gluten intolerance), and with each successive trip I’ve become more and more impressed with the gluten free options available. I’ll be writing more on this in subsequent blog posts, including a few reviews or recommendations for restaurants with great gluten free demarcation or options, but first I want to get to cover the one thing that everyone, gluten free or not, dreads.

On this trip we chose to fly British Airways, and we called ahead to ask for a gluten free meal option for me for my outgoing and return flights. It’s imperative to request gluten free meals as soon as possible when you’re booking long-haul flights; most airlines require 48 hours advance notice, but I would recommend requesting as early as you possibly can to ensure availability. Prior to my flight I also was sure to stock up on plenty of gluten free snack options, just in case they happened to forget my gluten free meal on board. As someone who suffers from perpetual hangriness if I don’t eat often enough, it always pays for me to be prepared.

So now onto the good stuff: the food. Overall, I’d give British Airways a solid B- for their gluten free options; on the way out I got a meal that seemed to be combo gluten and dairy free, with the main dish being chicken with tomato rice and broccoli, diced red pepper and carrot. It also came with a gluten free dinner roll, which was pretty good, a box of fresh berries, a side salad and two bottles of red wine.

The entree itself was pretty passable, in my opinion, but I was thrilled about the dinner roll (still a bread addict, even if it’s not wheat-based!), and the fresh options were a great addition that added a lot of color to my food. I supplemented my meal with a little cheese from my mom’s dinner because cheese, and a few snacks that we brought on the plane with us. (Hint: the snacks involved…more cheese. I have a problem, I know.)

Breakfast on the outbound flight was pretty depressing: I got some plain yogurt and a little cup of water. Inspiring. The breakfast of dreams. I didn’t even open the yogurt as there was nothing to sweeten it with, and try as I might I just know that I’m never going to be a yogurt purist capable of eating unsweetened yogurt on its own.

Our return flight was markedly better, and I wonder if that’s because the food was sourced from UK producers instead of American ones. A trend I noticed (and loved) overall in the UK was that their producers have really mastered the art of the gluten free bread. Sure, there’s still a little bit to be desired when most restaurants provide you with their GF bread, but in comparison to the United States the difference is astounding. Bread in England is actually bread sized, instead of the little half-slices you get in a standard American gluten free loaf. But back to the meal.

The first meal I was provided with was actually unbelievably good for airline food: where my first meal had been a C, this one was definitely almost an A. If you’re pretending that you’ve never actually had real food in your life, it would definitely be an A. By airline standards, this was a pretty awesome meal. I was served a little hot packet of chicken with a smoky roasted red pepper sauce, broccoli and…cauliflower rice. I’ve never had cauliflower rice before, and I have to say that British Airlines might have out-ritz’d me on this one. The cauliflower rice wasn’t just passable, it was good. The smoked red pepper sauce was also pretty awesome, and I think this is the only time I’ve ever demolished an airline meal out of choice rather than necessity.

In addition to the main course I also got another roll (BFree brand), some lentil salad which was not great, three cherry tomatoes and a bowl of fresh fruit.

The second meal on the return flight was an egg and mayonnaise sandwich, and even though ham and cheese might have been better it was still a pretty decent sammie. It also came with a gingerbread flavored Nakd bar, which was tasty!

Our flight home was also graced with some awesome views, which I can’t help but share below. Overall, I the BA experience was pretty great — we also got whole rows to ourselves, and a lot of free wine. The flight attendants were super attentive and friendly, and I would definitely fly (and eat!) with BA again! 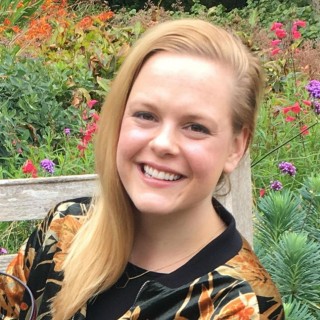 Hi there! I'm Natalie, a global foodie who is passionate about travel, writing and cooking. Join me here for reviews, recipes and guides for living an exciting (and delicious!) gluten free life! xoxo, Natalie